Showing posts from April, 2010
Show all

In Search of Rousseau 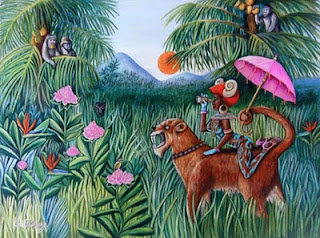 "In Search of Rousseau" 18x24 Colored Pencil on Sanded Panel This colored pencil painting which I completed a few months ago has been juried into the 18th annual CPSA International Exhibit . It was done as an homage to Henri Rousseau. For those of you who might not be familiar with the artist Rousseau, he began painting in his 40's in the time of Matisse. He was inspired by the exotic plants he saw at the Paris botanical gardens and by photos from books about Africa. He felt he had stepped into a dream when in the presence of the strange and beautiful plants and sought to project the mood to his paintings. Rousseau painted in a primitive, naive manner that was ridiculed by other artists - though it is thought he was not aware of their disdain for his paintings. His work was later held in higher regard and Picasso supposedly rescued one of his paintings from a street vendor who was selling it as a canvas that could be reused by artists seeking inexpensive painting supp
Post a Comment
Click here to read more
More posts

Linda Mahoney
I've been obsessed with drawing since I could hold a pencil! I'm an American artist with a BFA and 5-Year Signature Merit Status with the Colored Pencil Society of America. Most of my artwork is done in a realistic manner, but I enjoy exploring different styles and techniques.In addition to colored pencil, I work in acrylics and multi-media collage. My artwork is sold internationally and is contained in both private and corporate collections. Three different books have featured my colored pencil artwork. In the summers, you can find me teaching workshops in the cool climate of Cloudcroft, NM. Commissions are accepted to paint subjects of the collector's choice.